I didn’t particularly care too much about Matt – watching him in his first game in front of friends and family at Citi Field – but he has grown on me.  A lot. He even fits the Cubs culture to a T.  Few know he donated bone marrow to save a little girl in Eastern Europe.

In this past off season, Jed Hoyer threw support to Matt Szczur as a late inning defensive piece for the Cubs.  The fact he demolished the rest of the team in spring training – including soon to be Rookie of the Year Kris Bryant – in home run tallies the year before was long forgotten.  Slashing only .222/.278 /.333 with a .612 OPS will pretty much take you out of most offense focused discussions.  In fact his OPS+ dropped (73) from his 66 appearances in 2014 to 69 in 2015 with 80 plate appearances.  But his 2016 OPS+ shows he is 35% better than league average at 135.  It’s time to put him that discussion. 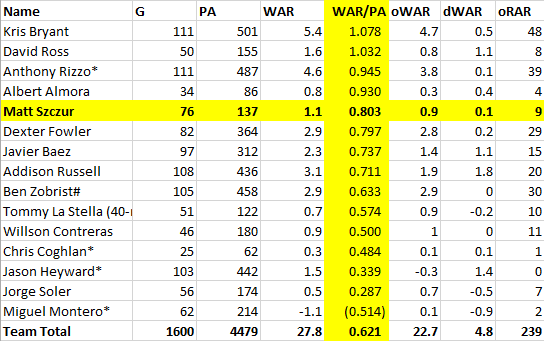 There are many things wrong with simply dividing accumulated WAR by plate appearance, not the least of which is the slithering SSS (small sample size) problem.  However, in Szczur’s case, he was batting over .300 PRIMARILY as a pinch hitter, a notorious degradation of true offensive potential.

Especially when  – by plate appearance – Salad out ranks Fowler, Zobrist and Contrearas in contribution to the club.  Only Bryant, Rizzo and Grandpa Rossy do better.  (I know – the fact David Ross is beating Rizzo should get some attention also.)  He hits lefties at .280 and righties at .342.  Why isn’t this guy starting every day?  Is it only because we paid more to JeyHey?

In 2010 through 2012, he was rated the fastest base runner in the organization.  There are rumors he upheld the unofficial title in this years spring training well. He is an above average base runner is BsR (albeit not quite as good as Jason), if you pull out his negatives in center field, he better defensively than anyone else EXCEPT the $184 Million man.

Matt Szczur showed a bit of offensive promise in A ball hitting as high as .314 in Peoria, but it seemed last year’s stint in Iowa where he went .292/.355/.442 in 305 plate appearances was his launching point.

Frankly, his astounding consistency in the first half had this blogger befuddled as to why he wasn’t getting more playing time.  Soler was gone and while Almora certainly has a higher upside – Matt was ALREADY HERE.

Is it possible that we actually might see Szczur start right field, and Heyward close after the 7th when we have the lead.  That would take enormous cahones by Skipper Joe, but I for one think it’s time to take this race car out on the track and see exactly how fast it will go.